All about the Intrepid ( Where the D75 Tech fair) is being held.

USS Intrepid (CV/CVA/CVS-11), also known as The Fighting “I”, is one of 24 Essex-class aircraft carriers built during World War II for the United States Navy. She is the fourth US Navy ship to bear the name. Commissioned in August 1943, Intrepid participated in several campaigns in the Pacific Theater of Operations, most notably the Battle of Leyte Gulf. Decommissioned shortly after the end of the war, she was modernized and recommissioned in the early 1950s as an attack carrier (CVA), and then eventually became an antisubmarine carrier (CVS). In her second career, she served mainly in the Atlantic, but also participated in the Vietnam War. Her notable achievements include being the recovery ship for a Mercury and a Gemini space mission. Because of her prominent role in battle, she was nicknamed “the Fighting I”, while her frequent bad luck and time spent in dry dock for repairs—she was torpedoed once and hit by four separate Japanese kamikaze aircraft—earned her the nicknames “Decrepit” and “the Dry I”. Decommissioned in 1974, in 1982 Intrepid became the foundation of the Intrepid Sea, Air & Space Museum in New York City. 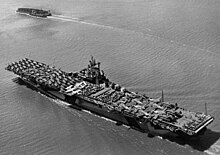 Intrepid off Hunter’s Point in June 1944, her deck loaded with aircraft to be transported to the Pacific Theater

Intrepid joined the Fast Carrier Task Force, then Task Force 58 (TF 58), for the next operation in the island-hopping campaign across the Central Pacific: the Gilbert and Marshall Islands campaign. On 16 January 1944, Intrepid, her sister ship Essex, and the light carrier Cabot left Pearl Harbor to conduct a raid on islands in the Kwajalein Atoll from 29 January to 2 February. The three carriers’ air group destroyed all 83 Japanese aircraft stationed on Roi-Namur in the first two days of the strikes, before Marines went ashore on neighboring islands on 31 January in the Battle of Kwajalein. That morning, aircraft from Intrepid attacked Japanese beach defenses on Ennuebing Island, up until ten minutes before the first Marines landed. The Marines quickly took the island and used it as a fire base to support the follow-on attack on Roi.[1]

With the fighting in the Kwajalein Atoll finished by 3 February, Intrepid and the rest of TF 58 proceeded to launch Operation Hailstone, a major raid on the main Japanese naval base in the Central Pacific, Truk Lagoon. From 17 to 19 February, the carriers pounded Japanese forces in the lagoon, sinking two destroyers and some 200,000 GRT of merchant ships. Additionally, the strikes demonstrated the vulnerability of Truk, which convinced the Japanese to avoid using it in the future. Intrepid did not emerge from the operation unscathed, however. On the night of 17–18 February, a Japanese torpedo bomber scored a hit on the carrier near her stern. The torpedo struck 15 ft (5 m) below the waterline, jamming the ship’s rudder to port and flooding several compartments. Sprague was able to counteract the jammed rudder by running the port side screw at high speed while idling the starboard screw for two days until high winds overpowered the improvised steering. The crew then fashioned a jury rigged sail out of scrap canvas and hatch covers, which allowed the ship to return to Pearl Harbor, where she arrived on 24 February. Temporary repairs were effected there, after which Intrepid steamed to Hunters Point Naval Shipyard in San Francisco for permanent repairs on 16 March, arriving there six days later.[1]

The work was completed by 9 June, and Intrepid began two months of training around Pearl Harbor. Starting in early September, Intrepid joined operations in the western Caroline Islands; the Fast Carrier Task Force was now part of the Third Fleet under Admiral William Halsey Jr., and had been renamed Task Force 38. On 6 and 7 September, she conducted air strikes on Japanese artillery batteries and airfields on the island of Peleliu, in preparation for the invasion of Peleliu. On 9 and 10 September, she and the rest of the fleet moved on to attack airfields on the island of Mindanao in the Philippines, followed by further strikes on bases in the Visayan Seabetween 12 and 14 September. On 17 September, Intrepid returned to Pelelieu to provide air support to the Marines that had landed on the island two days before.[1]

All About the United Nations

What does the U.N Do?

The United Nations came into being in 1945, following the devastation of the Second World War, with one central mission: the maintenance of international peace and security. The UN does this by working to prevent conflict; helping parties in conflict make peace; peacekeeping; and creating the conditions to allow peace to hold and flourish. These activities often overlap and should reinforce one another, to be effective. The UN Security Council has the primary responsibility for international peace and security. The General Assembly and the Secretary-General play major, important, and complementary roles, along with other UN offices and bodies.

The term “human rights” was mentioned seven times in the UN’s founding Charter, making the promotion and protection of human rights a key purpose and guiding principle of the Organization.  In 1948, the Universal Declaration of Human Rights brought human rights into the realm of international law.  Since then, the Organization has diligently protected human rights through legal instruments and on-the-ground activities.

One of the purposes of the United Nations, as stated in its Charter, is “to achieve international co-operation in solving international problems of an economic, social, cultural, or humanitarian character.”  The UN first did this in the aftermath of the Second World War on the devastated continent of Europe, which it helped to rebuild.  The Organization is now relied upon by the international community to coordinate humanitarian relief operations due to natural and man-made disasters in areas beyond the relief capacity of nationalauthorities alone.

The United Nations is headquartered in New York City, in a complex designed by Brazilian architect Oscar Niemeyer and built by the architectural firm Harrison & Abramovitz. The complex has served as the official headquarters of the United Nations since its completion in 1952. It is located in the Turtle Bay neighborhood of Manhattan, on 17 to 18 acres (6.9 to 7.3 ha) of grounds overlooking the East River. Its borders are First Avenue on the west, East 42nd Street to the south, East 48th Street on the north and the East River to the east.[4] The term “Turtle Bay” is occasionally used as a metonymfor the UN headquarters or for the United Nations as a whole.[5]

Ok so lets Jump, get those letters jumping follow the Movie and let’s scratch?

The Chrysler Building is an Art Deco–style skyscraper located on the East Side of Midtown Manhattan in New York City, at the intersection of 42nd Street and Lexington Avenue in the Turtle Bay neighborhood of Manhattan. At 1,046 feet (318.9 m), the structure was the world’s tallest building for 11 months before it was surpassed by the Empire State Building in 1931.[5][12] It is the tallest brick building in the world with a steel framework. As of 2018, the Chrysler is the sixth-tallest building in the city, tied with The New York Times Building.[13]

Originally a project of real estate developer and former New York State Senator William H. Reynolds, the building was constructed by Walter Chrysler, the head of the Chrysler Corporation, and served as the corporation’s headquarters from 1930 until the mid-1950s. The Chrysler Building’s construction was characterized by a competition with 40 Wall Street and the Empire State Building to become the world’s tallest building. Although the Chrysler Building was built and designed specifically for the car manufacturer, the corporation did not pay for its construction and never owned it, as Walter P. Chrysler decided to pay for it himself, so that his children could inherit it.

When the Chrysler Building opened, there were mixed reviews of the building’s design, ranging from its being inane and unoriginal to that it was modernist and iconic. Perceptions of the building have slowly evolved into its now being seen as a paragon of the Art Deco architectural style; and in 2007, it was ranked ninth on the List of America’s Favorite Architecture by the American Institute of Architects.

Here is our Tshirt Design we have to figure sizes and order them for the project.

My idea is to cut out a shape of Manhattan that will be glued to a board below with the water and bridges and of course our Statue of liberty. Here is a rough shape of Manhattan let’s discuss what will be included in our raised map. We have to build it and design it with what we want to include.

Lets also look at some facts about the Empire State Building.

Lets take a look at this map  and fill in the important points for our project.