Welcome to the THIS DAY IN HISTORY 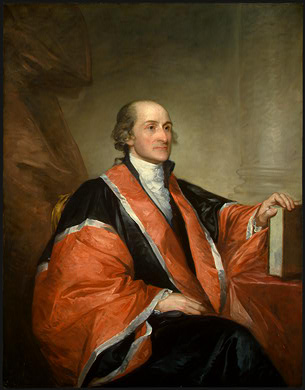 General Interest 1789 : The First Supreme Court The Judiciary Act of 1789 is passed by Congress and signed by President George Washington, establishing the Supreme Court of the United States as a tribunal made up of six justices who were to serve on the court until death or retirement. That day, President Washington nominated John Jay to preside as chief justice, and John Rutledge, William Cushing, John Blair, Robert Harrison, and James Wilson to be associate justices. On September 26, all six appointments were confirmed by the U.S. Senate. The U.S. Supreme Court was established by Article 3 of the U.S. Constitution. The Constitution granted the Supreme Court ultimate jurisdiction over all laws, especially those in which their constitutionality was at issue. The high court was also designated to oversee cases concerning treaties of the United States, foreign diplomats, admiralty practice, and maritime jurisdiction. On February 1, 1790, the first session of the U.S. Supreme Court was held in New York City’s Royal Exchange Building. The U.S. Supreme Court grew into the most important judicial body in the world in terms of its central place in the American political order. According to the Constitution, the size of the court is set by Congress, and the number of justices varied during the 19th century before stabilizing in 1869 at nine. In times of constitutional crisis, the nation’s highest court has always played a definitive role in resolving, for better or worse, the great issues of the time.

A Supreme Court Case In the News AND THE FIRST AMMEDNMENT

Let’s take a look at the first Ammendment;

Congress shall make no law respecting an establishment of religion, or prohibiting the free exercise thereof; or abridging the freedom of speech, or of the press; or the right of the people peaceably to assemble, and to petition the Government for a redress of grievances.

A Free Speech Battle Arises From Videos of Fighting Dogs

From the New York Times

The ones at issue in the case are old and grainy, and they feature commentary from the defendant, Robert J. Stevens, an author and small-time film producer. Mr. Stevens calls himself an educator, and his subject is the history and status of pit bulls.

“For centuries,” Mr. Stevens exclaimed on one videotape, “the American pit bull terrier has reigned supreme as the gladiator of the pit!”

Mr. Stevens, 69, had nothing to do with the dogfights themselves. But he did compile and sell tapes showing them, and that was enough to earn him a 37-month sentence under a 1999 federal law that bans trafficking in “depictions of animal cruelty.”

The Supreme Court will hear his case, which has divided animal rights groups and free-speech advocates, on Oct. 6. The central issue is whether the court should for the first time in a generation designate a category of expression as so vile that it deserves no protection under the First Amendment.

Dogfighting and other forms of cruelty to animals are illegal in all 50 states. The 1999 law was aimed solely at depictions of such conduct. A federal appeals court last year struck down the law on First Amendment grounds and overturned Mr. Stevens’s conviction.

But the Justice Department in the Bush administration pursued at least three prosecutions for the sale of dogfighting videos.

There is little dispute that crush videos are profoundly disturbing. The two dogfighting videos Mr. Stevens was prosecuted for selling present a harder question.

There was conflicting testimony at Mr. Stevens’s trial about the nature and social worth of the videos. Defense experts said the films had educational and historical value, noting that much of the footage came from Japan, where dogfighting is legal. A veterinarian who testified for the prosecution disputed that and said the videos depicted terrible suffering, including scenes of dogs that were “bitten, ripped and torn” and “screaming in pain.”

There is certainly biting in the dogfighting videos, but the fights are not bloody. In their Supreme Court brief, Mr. Stevens’s lawyers denied that any of the dogs in the videos were “ripped and torn,” and they counted “at most, 25 seconds containing yelps” in the more than two hours of footage on the tapes.

The third video at issue in the case, “Catch Dogs and Country Living,” shows pit bulls being trained to attack hogs and then hunting wild boar. The encounters are gory and brutal. Mr. Stevens participated in the hunting and filmed parts of the third video, which bears some resemblance to nature documentaries.

The law applies to audio and video recordings of “conduct in which a living animal is intentionally maimed, mutilated, tortured, wounded or killed.” It does not matter whether the conduct was legal when and where it occurred so long as it would have been illegal where the recording was sold.

That means it may be a crime for an American to sell a video of a bullfight that took place in Spain, where bullfighting is legal. And because all hunting is illegal in Washington, a literal reading of the statute would make the sale of hunting videos illegal here. The law contains an exception for materials with “serious religious, political, scientific, educational, journalistic, historical or artistic value.”

That exception may well protect journalism, scholarship and animal rights advocacy about subjects like factory farming, pharmaceutical testing, circuses and the slaughter of baby seals. But the determination of whether particular materials have “serious value” is, in the first instance at least, made by prosecutors.

News organizations, including The New York Times, filed a brief supporting Mr. Stevens. The 1999 law, the brief said, “imperils the media’s ability to report on issues related to animals.”

In a brief supporting the government, the Humane Society of the United States said that “gruesome depictions of animal mutilation targeted” by the law “simply do not merit the dignity of full First Amendment protection.”

When federal agents raided Mr. Stevens’s home in rural Virginia in 2003, he had no idea, his lawyers and family say, that he was breaking the law.

But there are hints in the videotapes that Mr. Stevens at least knew that people participating in dogfighting in the United States were doing something illegal.

“Because I’m not going to show any participants or spectators, I have to cut a lot of it,” Mr. Stevens, who has a folksy manner and looks a little like the actor Bill Murray, said on one of the videos. “I only show certain action clips I think you’ll enjoy.” Mr. Stevens did not try to hide the identities of those involved in the Japanese dogfights or in the video of dogs attacking hogs.

There is a crucial difference, Mr. Stevens’s lawyers told the Supreme Court, between illegal conduct and depictions of that conduct.

“While acts of animal cruelty have long been outlawed,” the brief for Mr. Stevens said, “there have never been any laws against speech depicting the killing or wounding of animals from the time of the First Amendment’s adoption through the intervening two centuries.”

State and local governments occasionally try to ban depictions of violence against people, notably in videogames. But those laws are routinely struck down, and the Supreme Court has never ruled that speech about nonsexual violence is beyond the protection of the First Amendment.

Mr. Stevens’s sentence was 14 months longer, the brief noted, than that of Michael Vick, the football star who actually participated in a dogfighting venture.

Through his lawyers, Mr. Stevens declined to be interviewed. He has said he never had his own dogs participate in dogfights.

Mr. Stevens’s son, Michael, said his father was guilty of nothing more than a longtime fascination with the affection, loyalty and passion of pit bulls. “You couldn’t treat a dog any better,” the younger Mr. Stevens said, “than my father treats pit bull dogs.”